CalATMA: The Pulse of the Profession

For the past two decades, California has been home to approximately 26 state acupuncture organizations. The aim of each one has been to “speak on behalf of licensed acupuncturists in California,” but despite this intent, the majority of them have prioritized their own particular interests.

Over time, a number of these groups have merged, splintered, dissolved or reformed themselves. The lack of a centralized, professional voice, to indeed speak for each and every California LAc, has greatly affected how issues are addressed by the California Acupuncture Board and has led to serious Liver Qi stagnation in state acupuncture politics.

Long before the 2004 “Little Hoover Commission” issued its report, these various organizations resisted working together to address ongoing issues. More than 14 years after its publication, the 136-page report is itself a contentious issue.1 A number of practitioners have felt that moving past this outdated model of these separate fiefdoms and speaking with one unified voice is long overdue. Fortunately, a new direction has begun to take shape.

In December 2017, Assemblyman Evan Low (D-CA 28) recognized that patients in California were not being well-served by the current fractionated acupuncture trade representations. He organized several stakeholder meetings of leadership groups to discuss the varied issues.

As a result of these meetings, Assemblyman Low brought together more than 100 leaders in a historic effort to unify these interests.2 His staff established vetting criteria and worked hard to establish a steering committee with the goal of creating a unified voice for California acupuncturists. On April 8, 2018, the steering committee was sworn in at the Capitol and its members rolled up their sleeves.

Steeped deep in historical prowess and professional credentials, the committee’s hard work began in earnest with the goal of elevating professional representation statewide and offering the best possible health care possible to Californians. One committee member, Neal Miller, LAc compared the significance of the inaugural steering meeting to the historic moment in 1976 when then Governor Jerry Brown legalized acupuncture in California.

The steering committee is comprised of members from a number of acupuncture organizations. Michael Fox, PhD, LAc, current president of the California Acupuncture Association (CAA), was elected as committee chair, Anyork Lee, MBA, PhD, DAOM, LAc, former president of the California Acupuncture Board, as vice chair, and Jung Eun Seo, DAOM, LAc, a board member of the American Acupuncture & Alternative Medicine Association, as secretary/treasurer. In all, nine organizational representatives, four at-large members, and one student were empaneled. Every member of the steering committee was highly qualified and eager to take on this juggernaut task.

In the first half of 2018, the steering committee created the California Acupuncture and Traditional Medicine Association (CalATMA), which will soon become a 501(c)6 organization designed to speak for all California LAcs, particularly on critical legislative issues. Building on a growing membership of individuals from any and all acupuncture interest groups, its goals are common to the majority of the state’s 26 existing acupuncture organizations.

Yong Ping Chen, PhD, LAc, who chairs CalATMA’s governance and structure subcommittee, created its mission statement: “The mission of CalATMA is to protect, promote, integrate and advance the practice of acupuncture and traditional medicine, preserve the rights of the patients it serves, and seek continuous improvement in the quality of patient treatment and care.”

Dr. Chen’s passion for higher educational standards is reflected in CalATMA’s vision statement, emphasizing one of its long-term goals: “By 2028, acupuncture and traditional medicine in California will be provided by licensed, doctoral level acupuncturists who are recognized by consumers, insurance carriers, and other healthcare providers as primary healthcare professionals.”

A number of specific topics will be addressed by this new organization: the challenges soon to be brought by physical therapists striving to add dry needling to their scope of practice; clarification of the term “Asian massage” now encoded in the acupuncture scope of practice; advocating for parity of insurance coverage and payments to its practitioners. These goals will be more fully developed as its membership grows and its legislative committee formulates more definitive plans.

In addition, there is the important issue of whether to endorse the NCCAOM exams as a replacement for the CALE has been contentious; many Asian licensees strongly oppose this although it is widely supported among anglophone licensees and students. Another important but divisive issue is the question of whether to disband the original organizations entirely, in favor of one single organization with one single voice.

Several members of the steering committee have faced harsh criticism from their own organizations for merely reporting on CalATMA topics and have been ejected from their organization’s chat groups. In discussing these and other topics, Assemblyman Low encouraged everyone to “argue at home, as a family would, come to a decision and then present a unified decision” to the legislature.

The steering committee is well aware that national organizations are watching California closely, viewing California unification as crucial to the federal legislation progress. David Miller, MD, LAc, chair of the American Society of Acupuncturists (ASA), has noted that the “organization sees the critical importance of California unification and strongly supports efforts towards such. CalATMA would be welcomed into the ASA, and a more unified California would mean a stronger profession as a whole nationally.”

Disagreements notwithstanding, steering committee endeavors have already proven successful. Learning of a 12-day window of opportunity through Ms. Corches, Chairman Fox called an emergency meeting seeking a resolution to “Support if Amended” legislative bill AB 3142, a routine sunrise bill for the California Acupuncture Board (CAB). At issue was the renewal period for the CAB. Typically a four-year renewal is granted but the legislature was once again proposing a reduced two-year renewal as it had for the past two cycles since 2014; a third cycle of rebuff loomed.

With unanimous agreement, CalATMA issued a letter of “Support if Amended”3 and went even further: each of its constituent organizations issued a call-to-action for members to request a four-year sunrise. Hundreds of letters poured in. Fax machines at the Capitol ran out of paper and were replenished over the weekend. Students and licensees alike expressed support for CalATMA and the four-year term.

Legislators promptly responded. An amended bill was presented to the Senate first thing Monday morning, August 27th. CalATMA letters of “Support” were issued within hours. The Senate passed the amended version, and the Assembly concurred on August 29th. Governor Jerry Brown has until the end of September 2018 to sign this bill. Legislative aides for Assemblyman Low’s office sent a letter to CalATMA saying “we are deeply appreciative of the work you have done so far and we hope you will continue to make progress in forming a single, unified association. We look forward to continuing to work with CalATMA in the future.”

Acupuncturists have many questions about and for this new organization. CalATMA has planned several town hall meetings to address these and invite feedback. The next one will be held in San Diego on September 9, 2018, featuring acupuncturists Z’ev Rosenberg and Peter Lecke. More events are in the works for Los Angeles, Oakland, Palm Springs and other locations.

There are over 11,000 licensed acupuncturists in California but fewer than 2,000 have joined any kind of professional association. Chairman Michael Fox notes, “As more practitioners realize that a unified voice is critical to their profession, they will recognize that CalATMA represents the untapped potential of our legislative voice.”

Lynn Eder is a professional writer and editor for the acupuncture profession.  She was associate editor for The American Acupuncturist from 2009-13 and managing editor for Meridians: The Journal of Acupuncture and Oriental Medicine from 2014-2018. 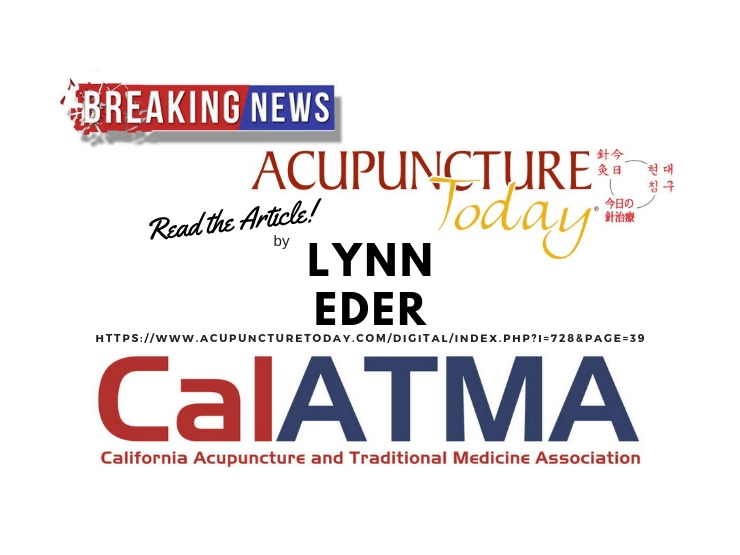